It seems that nobody wants to release statistics about how their apps are doing on the iTunes App Store, yet a lot of people want to know how well various apps are doing. I’ve seen a couple of examples of income and download numbers, but I’d still like to see more. So, I’m putting my money where my mouth is and publishing the download statistics for my first app, Prayer Book.

For some background about the app, you may want to check out my earlier post. After submitting Prayer Book to Apple on September 24th, they approved it for sale on October 2nd. It was immediately placed on the App Store, but it was never at the top of the recently released apps list, because I had set the release date to be September 24th. It wasn’t until 3 months later that I learned that your order in the App Store has nothing to do with the date Apple approves your app.

Up until the writing this post, there have been 9,448 downloads of Prayer Book, with an average of 91 downloads a day. Not bad I think. December was a particularly interesting month, so I’ll share some more detailed numbers there. 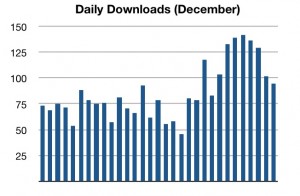 December was shaping up to be a pretty regular month, and then on the 22nd, there was a spike to 118 downloads, then a drop, and then another spike that lasted from the 25th-29th.

I only have data up to the 13th of January included in the monthly table above, but that’s already further ahead in downloads than the same time in December (941 downloads from December 1-13). Granted, December will probably still be better than January because of the Christmas activity.